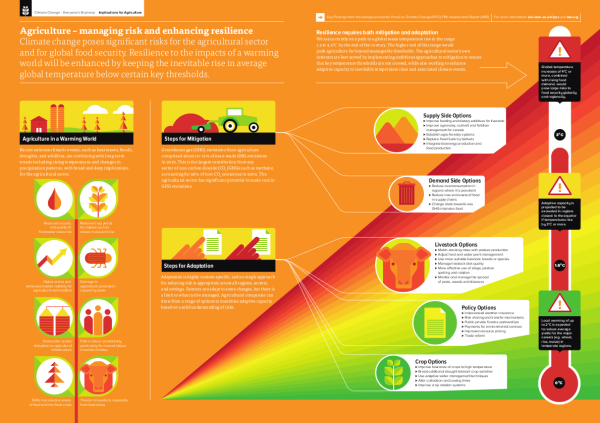 The most extensive land-based study of the Amazon to date reveals it is losing its capacity to absorb carbon from the atmosphere. From a peak of two billion tonnes of carbon dioxide each year in the 1990s, the net uptake by the forest has halved and is now for the first time being overtaken by fossil fuel emissions in Latin America.

The results of this monumental 30-year survey of the South American rainforest, which involved an international team of almost 100 researchers and led by the University of Leeds, were published last month in the journal Nature.

Over recent decades the remaining Amazon forest has acted as a vast ‘carbon sink’ – absorbing more carbon from the atmosphere than it releases – helping to put a brake on the rate of climate change. But this new analysis of forest dynamics shows a huge surge in the rate of trees dying across the Amazon.

Lead author Dr Roel Brienen, from the School of Geography at the University of Leeds, said: “Tree mortality rates have increased by more than a third since the mid-1980s, and this is affecting the Amazon’s capacity to store carbon.”

Initially, an increase in carbon dioxide in the atmosphere – a key ingredient for photosynthesis – led to a growth spurt for the Amazon’s trees, the researchers say. But the extra carbon appears to have had unexpected consequences.

Study co-author Professor Oliver Phillips, also from the University’s School of Geography, said: “With time, the growth stimulation feeds through the system, causing trees to live faster, and so die younger.”

Recent droughts and unusually high temperatures in the Amazon may also be playing a role. Although the study finds that tree mortality increases began well before an intense drought in 2005, it also shows that drought has killed millions of additional trees.

Dr Brienen said: “Regardless of the causes behind the increase in tree mortality, this study shows that predictions of a continuing increase of carbon storage in tropical forests may be too optimistic.

“Climate change models that include vegetation responses assume that as long as carbon dioxide levels keep increasing, then the Amazon will continue to accumulate carbon. Our study shows that this may not be the case and that tree mortality processes are critical in this system.”

The study involved almost 100 scientists, many working for decades across eight countries in South America. The work was coordinated by RAINFOR, a unique research network dedicated to monitoring the Amazonian forests.

To calculate changes in carbon storage they examined 321 forest plots across the Amazon’s six million square kilometres, identified and measured 200,000 trees, and recorded tree deaths as well as growth and new trees since the 1980s.

“All across the world even intact forests are changing”, added Professor Phillips. “Forests are doing us a huge favour, but we can’t rely on them to solve the carbon problem. Instead, deeper cuts in emissions will be required to stabilise our climate.”

A map of the plots in the Amazon where tree measurements were taken for the study. Credit: Georgia Pickavance, RAINFOR / GLC2

Tiny microbial activity on glaciers in the Arctic is reducing heat reflected back into the atmosphere. This effect has previously been overlooked but is expected to increase the effects of climate change in the polar regions.

Over the past few years Professor Liane G. Benning and PhD student Stefanie Lutz, members of the Cohen geochemistry research group in the School of Earth and Environment, have been busy making trips to Svalbard and Iceland to measure the ‘albedo’, the reflectivity, of glaciers and how microbial gardens might effect the amount of sunlight reflected by the glacier.

They discussed their recent trip to Svalbard with BBC’s Paul Hudson on his Weather Show radio channel. As well as talk about watching a solar eclipse from the the North, polar bear attacks, northern lights and news on a big new grant to study glaciers in Greenland! 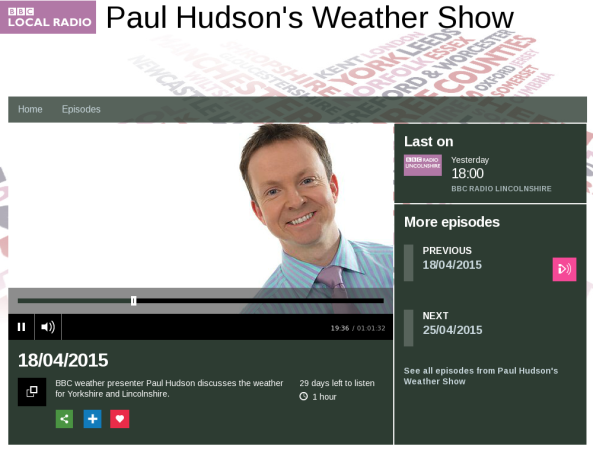 President Barack Obama in his 2015 State of the Union address highlighted the importance of tackling the climate change crisis.

The year 2014 was Earth’s warmest in 134 years of records, according to separate independent analysis of temperature data by NASA’s Goddard Institute for Space Studies (GISS) and scientists at the National Oceanic and Atmospheric Administration (NOAA).

Independent measurements by 4 separate institutes around the world all agree that the world has been getting warmer since 1880 with accelerating warming in the last few decades.

Since 1880, Earth’s average surface temperature has warmed by about 0.8 degrees Celsius, a trend largely driven by the increase in carbon dioxide and other human emissions into the atmosphere. The majority of that warming has occurred in the past three or four decades.

Check out the map below (compiled by NOAA) for some of the significant global climate events of 2014.

What starts out as a happy blue planet in this NASA video quickly becomes an angry red one, with nine out of the 10 hottest years in recorded history all occurring in the new millennium.

The latest IPCC report on climate change represents our most up to date understanding of the Earth’s climate, it’s changing behaviour and projections for the future.

CGS scientist Professor Piers Forster, one of the lead authors of the new synthesis report, has summarised the summary in just 18 tweets. 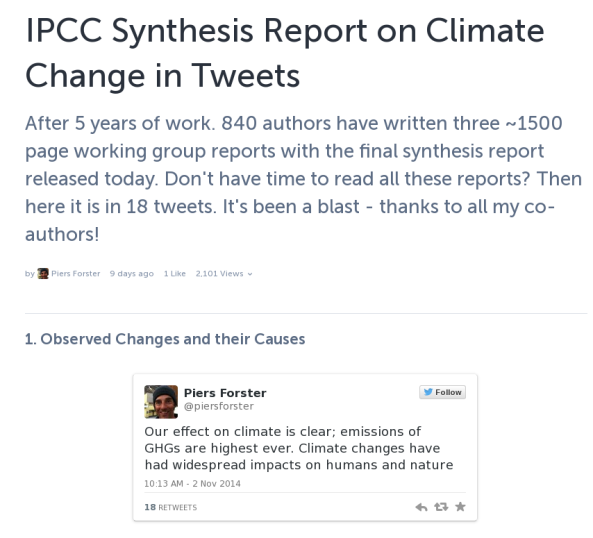 Perhaps the most sensitive, heart-breaking, yet necessary action we will have to take in this next century is abandoning our coastal cities as climate change threatens their very existence.

World leaders gathered yesterday for a crucial United Nations meeting to encourage 120 member states to sign up to a new comprehensive global climate agreement in Paris next year.

The last such meeting in 2009 ended with no concrete results. However the meeting yesterday was hailed by the United Nations Secretary General Ban Ki-moon, saying “never before have so many leaders gathered to commit to action on climate change”.

The interactive map below shows what each country has promised (source: mashable.com).